If you are really interested in sightseeing and you would like to see the most famous historical monuments of Prague, then our hotel LFH Royal Palace 5* is the right choice for you. Because all these monuments are only few minutes by walk from our boutique hotel. Charles Bridge is right around the corner!

Charles Bridge is one of the oldest bridges and most iconic structures in Czech Republic. Construction of the bridge started in the year 1357, during the reign of King Charles VI. and was finnished in 1402. Because they used mostly sandstone, originally the bridge was called the Stone Bridge or Prague Bridge, before being named Charles Bridge in 1870.

The bridge is 515 – meters long and connects Old Town and Lesser Town (Malá Strana). Each side is fortified by towers. Both are accessible to the public and afford great views. Charles Bridge is adorned with 30 stone statues of saints and personages. The original statues are deposited in the Charles Bridge Museum next to the bridge. The main architect and builder was Petr Parléř, who also designed St. Vitus Cathedral in 1402.

If you would like to have permanent view to the Prague Castle, we recommend you to make reservation in our hotel Royal Palace 5*! We offer spectacular view from almost all hotel rooms we have, because our hotel is right next to Wallenstein Garden and Prague Castle.

Prague Castle is the largest castle complex in the world according to the Guiness Book of World Records. The complex is located in the district of Hradčany, unmistakable and highly visible on a hill above the Vltava river. It is not only a symbol of the Czech Lands but also one of the most important cultural institutions and official residence of the President.

Prague Castle was founded in the 9th century by Prince Bořivoj of the Premyslid Dynasty. The whole complex, including connected palaces, courtyards and gardens, has almost 70 000 square meters and bears the mark of each architectural and historical era – Romantic era, Renaissance era, gothic style etc.

The most popular for visitors is the Gothic St. Vitus Cathedral, the medieval Golden Lane and St. George’s Basilica. Changing of the guard is also very famous ceremony in the first courtyard at noon.
The Castle is also a UNESCO World Heritage site. Definitely worth a visit.

From Royal Palace you can walk to National Theatre without any problem! If you are tired, you can take a tram, it is 3 stops only to get there.

Even if you are not going to see any performance at National Theatre, surrounding of the Theatre definitely also worth to visit. Beautiful building, next to Vltava river, with really nice view to Prague Castle, with a lot of restaurants and cafes around.

Performances are played in the historical building of the National Theatre, in the Theatre of the Estates and in the Kolowrat Theatre.

The cornerstone of the National Theatre was laid on 16 May 1868. During these works the carelessness of construction workers who badly extinguished charcoal during their work on the roof, lead to the fire. On 18 November 1883 the theatre was reopened and Bedřich Smetana’s opera Libuše was given its world premiere.
The interior artwork was done by Mikoláš Aleš and František Ženíšek. 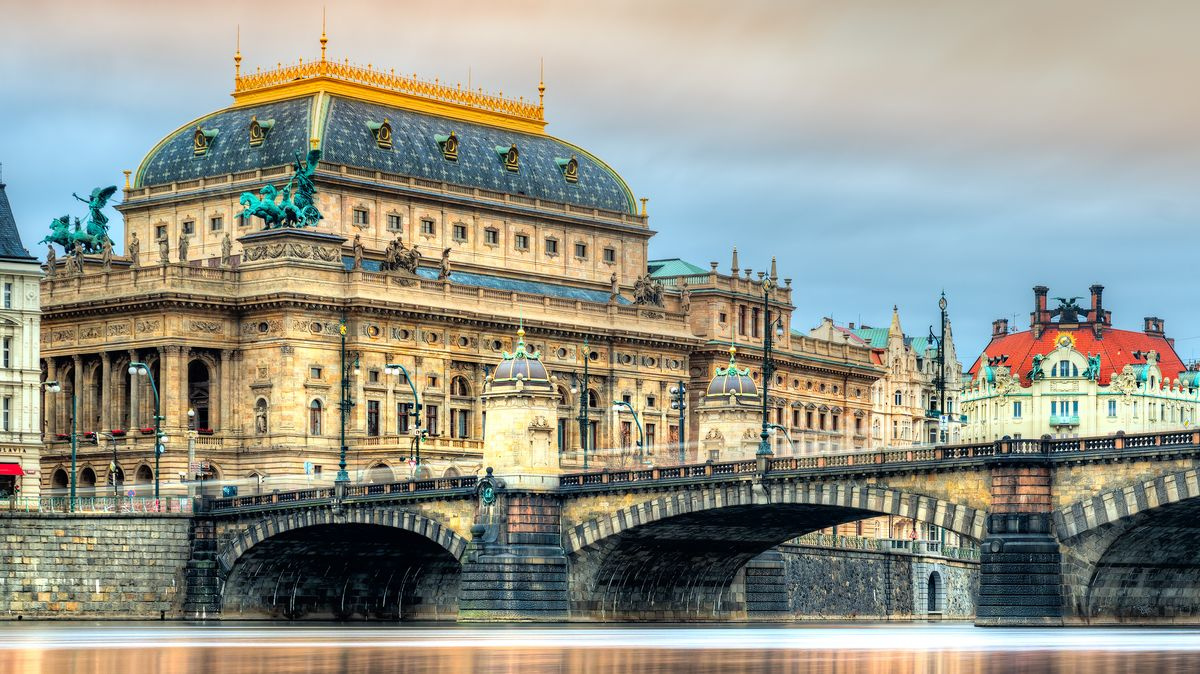 The Municipal House stands at the site of the royal residence called King's Court. It was a building from the time of Wenceslas IV around 1383, which served as an interim dwelling of King Zikmund; Ladislav Pohrobek died here and the coronation procession of Jiří z Poděbrad started its journey here. The King's Court was demolished in 1902 - 1903. The intention of the Prague City Hall to build a representative building and the desire of the most important Czech Burgher Association Měšťanská beseda to expand its facilities with the costs being paid by the City were at the birth of a new building, which would represent the capital city of the Kingdom and support the Czech social life. In 1902 the City Council approved the construction and in 1903 it approved the purchase of land next to the Powder Gate. In 1904 the project was approved and construction works began in 1905. The building was built from 1905 to 1911 according to the project of architect Antonín Balšánek and Osvald Polívka as a centre of the Czech cultural life and as a counter balance of the nearby German House and Casino and the German promenade at Na Příkopě Street. It became the centre of social life and a place of important historical events, which is evidenced by the bronze plaque by Ladislav Šaloun that is located outside next to the Powder Gate.

The Old Town Square is also very near from our five star hotel. 5 - 10 minutes by walk across the bridge and you are right there!

Nowadays, The Old Town Square is one of the most visited places in the Czech Republic and it is the historical centre of the Old Town. The square is also a venue for numerous occasions such as Christmas fairs, Eastern markets etc.

You can find there many important historical buildings – the Gothic Church of Our Lady in front of Tyn, The Old Town City Hall with astronomical clock or Baroque church St. Nicolas.

One building that dominates the square is the Old Town City Hall, which dates back to 1338. In 1410 the astronomical clock was added to the Hall with a chronometer and the zodiac below – this clock is a worldwide attraction. Hundreds of people gather at the start of every hour to see the installation – 12 apostles rotating inside the clock.
If you climb the tower you can enjoy truly breathtaking views of the square and see why Prague is called the city of 1000 spires.

In the middle og the square you will find a statue of religious reformer Jan Hus, who was burned at the stake for his beliefs.

The funicular on Petřín Hill was first put into operation on 25th July 1891 and ran until the beginning of the First World War. It was put back into operation again on 5th June, 1932. In July 1965 heavy rains caused the Petřín slope to soften, and the funicular had to be stopped. After a twenty-year break, it started running again on 15th June 1985.

Rising up from atop the leafy Petřín Hill, which forms a backdrop to Malá Strana, the Petřín Lookout Tower was inspired by the Eiffel Tower in Paris, although it is not a scale model. Built in 1891 for the occasion of the Jubilee Exhibition, the 60-meter-high tower has 299 steps (as well as an elevator) leading up to the top viewing platform.

The Petřín Lookout Tower was built by the Czech Tourist Club, which had attended the Exposition Universelle in 1889 in Paris and decided to construct a similar tower in Prague. On 16 March 1891, work began with the help of engineers František Prášil and Julius Souček. It opened on 20 August of the same year.

The heart of the lookout tower is an octagonal tube structure, which contains the elevator. Two spiral staircases wind around this – one for the journey up and the other for the way down. The lookout tower has two observation decks.

The tower is accessible either by walking up the steep paths of Petřín Hill or by taking the funicular that runs from Újezd.

An eye-catching part of the Malá Strana skyline, St. Nicholas Church is one of the most significant buildings from the Prague Baroque period, notably for its copper dome and belfry, making it one of the most stylistically pure examples of High Baroque architecture north of the Alps. Not be confused by the Old Town church of the same name, this building dates to 1703.

Originally an Early Gothic church founded at the beginning of the 13th century, it was also consecrated in honor of St. Nicholas of Myra. The Baroque St. Nicholas Church was built under the supervision of architect Christoph Dientzenhofer, and later his son, Kilian Ignaz.

The main and the largest Prague temple, spiritual symbol of the Bohemian state. It has been built in place where the episcopate was located, and later the archiepiscopate. In the choir, there is the bishops’ tribune, or cathedra, thus the term cathedral.

On the 23rd April 1997, Cardinal Miroslav Vlk issued a decree on the basis of which the object acquired its original name again, Cathedral of St. Vitus, Václav and Vojtěch. The cathedral has been consecrated to three saints: Prince Václav (canonized later) established the third church at the Castle around 925 - Rotunda of St. Vitus.

The cathedral is made up of two parts: the Eastern part, which contains a choir with chapels and large bell tower, was built in the Gothic era of the 14th and 15th centuries; the Western part with the transept, a three-aisled space and the front with towers was only annexed in the 2nd half of the 19th century and in the beginning of the 20th century.

The Valdštejn garden is probably the first palace garden in Prague built in connection with the palace object. It belongs to the Valdštejn Palace No. 17, accessible from the square Valdštejnské náměstí, No. 4. Strictly geometrical garden representing early Baroque spreads between the palace, the Valdštejn Riding School and Letenská Street, and it is enclosed by a wall. Its surface area is 1.7 ha. The palace complex, including the garden, was built in the years 1623 - 1630. Albrecht of Valdštejn, imperial army general of Ferdinand II, created the premises in place of 25 houses, 7 gardens, a brick-kiln and other land plots.

The grandly conceived square originated at the New Town establishment by Karel IV in 1348. It is 750 m long and 63 m wide in the upper part and 48 m wide in the bottom part. Within a few years, houses and workshops of craftsmen, malt houses and breweries were built around the assessed area. The square was called the Horse Market, as it was intended for trading horses, and in addition to the sale of various agricultural products. Later cots were built at the bottom of the square for sale of saddler’s and case goods, fabrics and spices. Markets took place here till 1877. From 1912 to 1913 the Statue of St. Wenceslas by Josef Václav Myslbek (see separate document Monuments and statues) was built at the top of the square. Saint Wenceslas, the patron of Czech lands, witnessed many famous and tragic events in the modern history of the country and the people of Prague. Likewise, Wenceslas Square has always been and still is primarily a natural centre of Prague New Town inhabitants and Prague citizens in general.

Despite being only a fraction of its former self, Prague’s Jewish Quarter comprises the best current complex of Jewish historical monuments in all of Europe. The smallest of Prague’s districts was walled off as a ghetto in 1096, following a pogrom against its inhabitants, who were mainly Jewish immigrants. The ghetto thrived for centuries, giving birth notably to the legend of the Golem around the 16th century. Between 1893 and 1913, however, the district was razed to the ground as part of expansive redevelopment plans, leaving only a few significant buildings as the living testimony of many centuries of Prague Jewish life.

Accept Cookie
This site uses cookies to improve its services. By staying on this page, you consent to their use.